Reconstructed by Unicron from the broken body of Megatron. Galvatron were entrusted to destroy the Autobot Leadership Matrix. 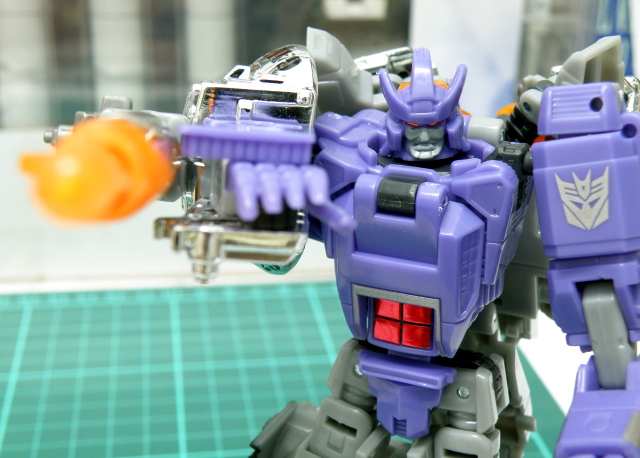 After a series of complex transformation from tank mode to robot mode. Galvatron is almost the same rendition of its G1 Transformers movie.

Compared to others Henkei or Transformers Classics or Transformers Universe toy. Galvatron Transformation is complex and frustrating. Wrong application of force will causes parts to be pop out. Which is true to the left arm shoulder sockets. 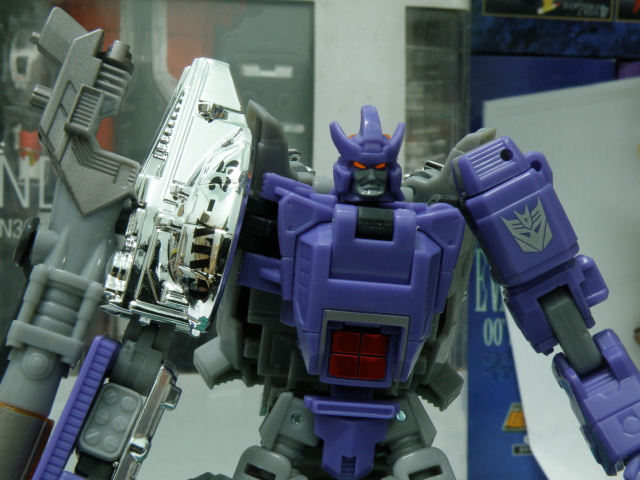 The cannon at the left arm, is dominant, it takes about 30% of the entire Robot mode. The entire turret is folded and transformed into Galvatron´s right arm. Unfortunately, the hand is molded as a static opened arm with sharp claw like fingers. 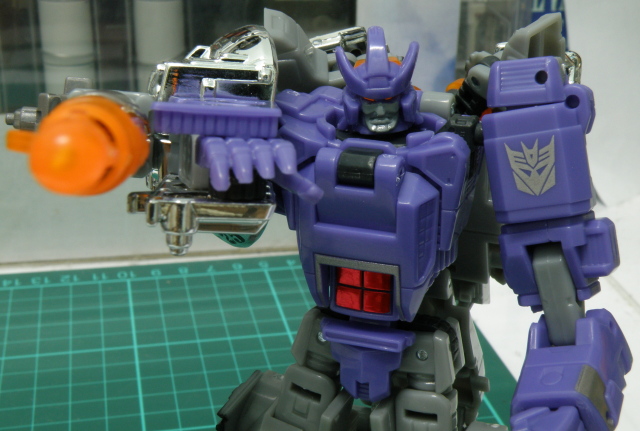 In robot mode, the right arm is restricted to rotation at the shoulder axis and abit of articulation at the elbow. Nevertheless, the big gun is a cool factor. The gripe is Galvatron´s hips feels very feminine. It´s waist is able to be twisted. 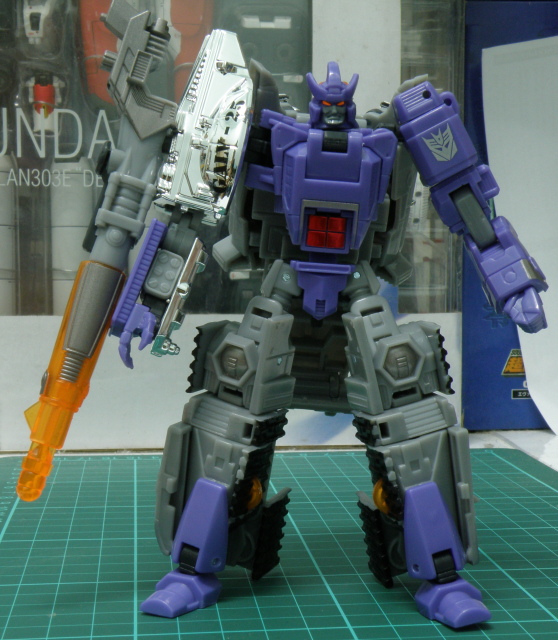 The entire leg is made up from the tank threads. Alot of twist and turns and folding are required. Another half of the tank threads is transformed into Galvatron back or back pack. Unfortunately, there is no pegs to lock them into more stable position. 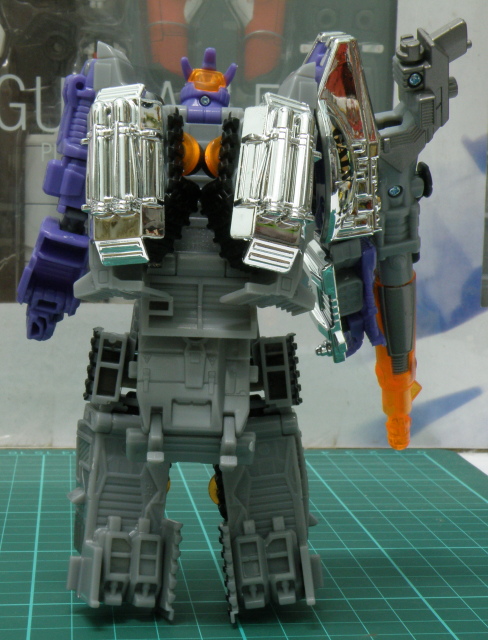 Past of the tank top is transform into Galvatron lower back slightly above the pelvic region; giving an impression of a skirt armor. Perhaps to prevent its foe shooting lasers at its butt. The skirt armor part is floppy. 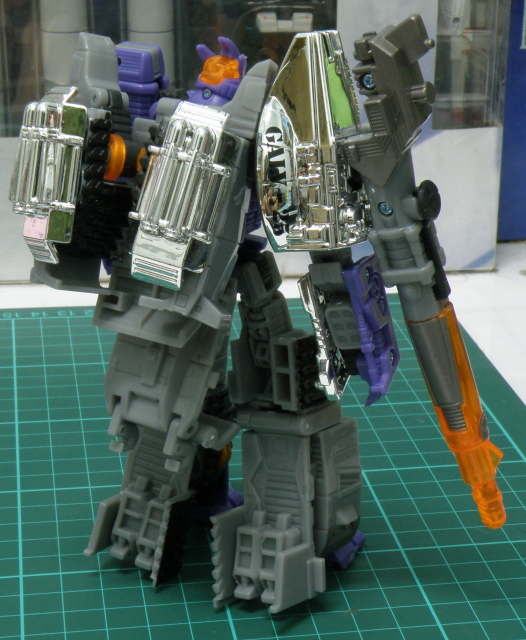 Without the pseudo jet pack, Galvatron upper body would seems scrawny and thin. The jet pack beef up Galvatron appearance. 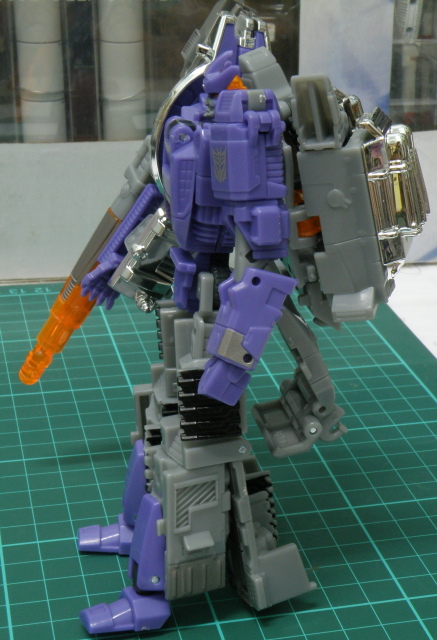 The left arm is thin not proportioned to the right beefy cannon arm. Perhaps Galvatron fitness instructor specialized on building the right arm. 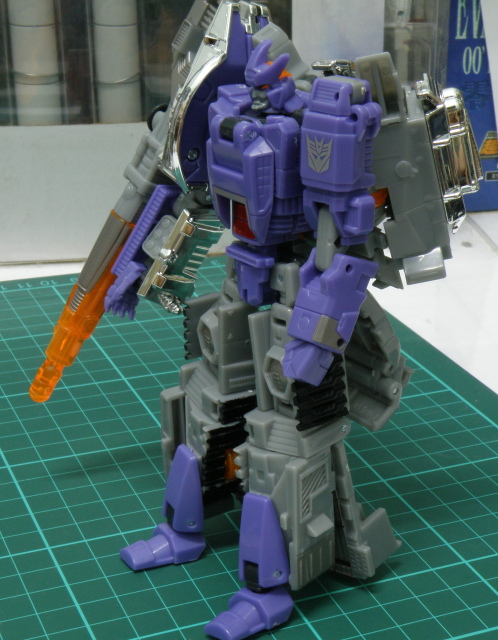 The length of the cannon on the right arm is 90-95 percent of the Galvatron robot height. 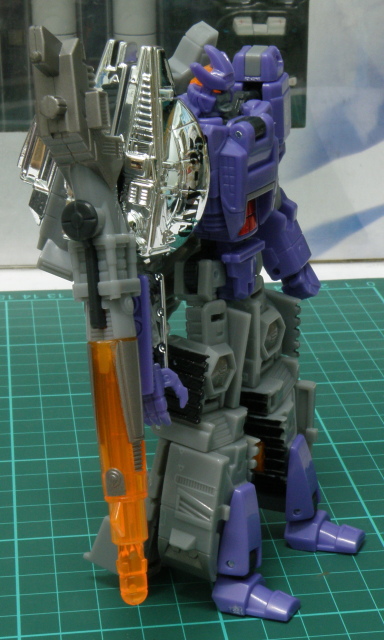 In term of detailing and face sculpt, it is a good as it gets compared to all existing official toy line from TakaraTomy or Hasbro. 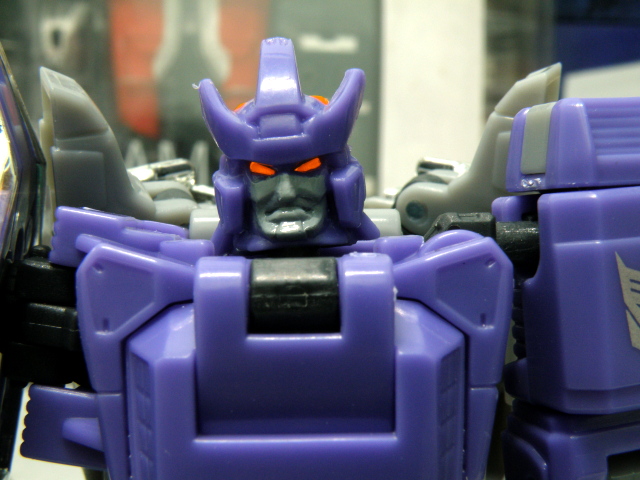 The eyes is made of translucent amber colored plastics. Light is allows to pass thru from the back to the front to give an amber glow at the eyes. 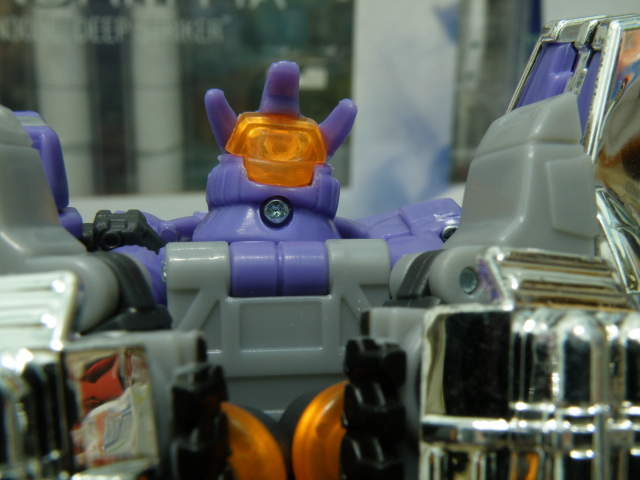 Galvatron head detailing at the back.

The head is only able to turn left to right, it is not able to look up or down. Articulation of Galvatron figure is very limited to make things worse the joints are quite loose and floppy. The figure itself in robot mode is floppy and feels flimsy. It is less durable compared to its other Henkei toyline counterparts. 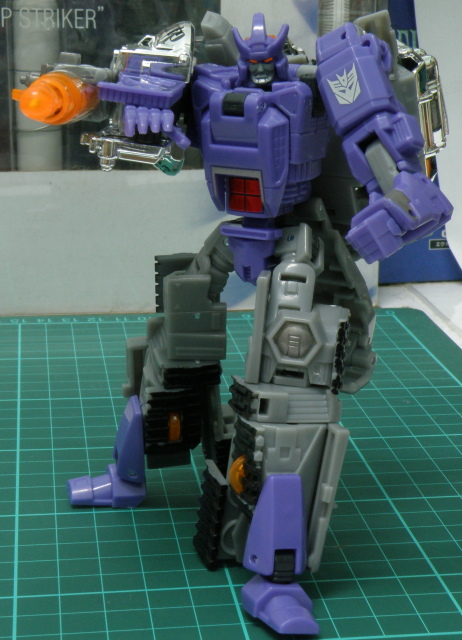 Galvatron getting ready to fire.

Due to the top part is heavier to the back and floppy hips, it has tendency to fall back. 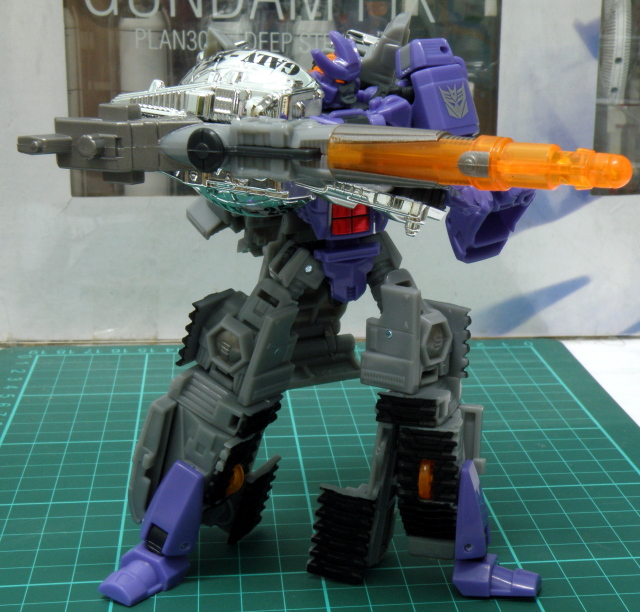 Overall, the Henkei Galvatron toy in its robot mode has a lot of flaws. Gaps, floppiness, disproportioned, thin, scrawny, amber instead of red eyes.

The only reason that it is a taker is this-is-Galvatron factor. Only made for die hard fans. For casual playing it is not recommended at all.